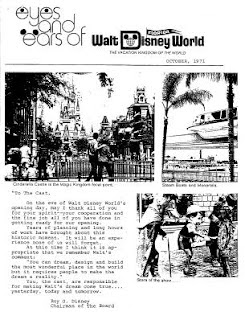 This just in from Jim Korkis:
[When the Magic Kingdom opened at Walt Disney World in October 1971, it was all a very new experience for cast members and guests despite the fact that some had been to Disneyland. Here is the first issue of EYES AND EARS (click on this link to download it), the cast newspaper for WDW, that was to acquaint the cast members with all the information they would need to know to including describing STOLport (the Short Take-Off and Landing strip that was near the Magic Kingdom). The prices were quite different in those days.]
Posted by Didier Ghez at 12:26 AM