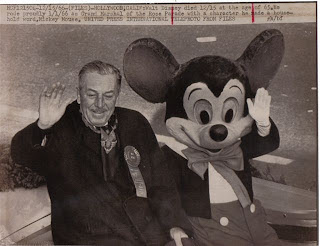 This just in from Neil Armstrong:
[Hi Didier,

As promised here is a scan of one of my recent purchases.

It is a great shot from the archives of the San Francisco Examiner showing Walt, with Mickey, acting as Grand Marshall of the Tournament of Roses Parade on New Years Day 1966. You can see in the photo how much Walt was aging in that last year of his life. As Bob Thomas put it in "Walt Disney: An American Original":

"On New Years Day 1966, Walt Disney was my millions on television as Grand Marshall of The Tournament of Roses Parade in Pasadena. To the generation that had seen him weekly on his television series he seemed little different. The same straight hair and trimmed mustache - perhaps a little greyer - and the same wide grim and upraised eyebrow. But those who worked closely with Walt could see changes."]
Posted by Didier Ghez at 1:03 AM