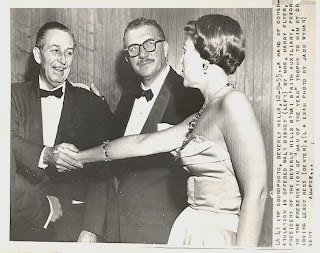 [Here is a photo currently being auctioned on eBay.

There are many urban myths surrounding Walt Disney and one of them is that he was anti-Semitic. He wasn't and there's a lot of proof to prove he wasn't but people still don't want to believe the truth. Well, here's another piece of evidence. Walt getting the Man of the Year award in 1955 from a top Jewish organization.

When the B'nai B'rith decided to give Walt the Man of the Year Award in 1955, it first did a thorough investigation into the rumors that Walt might be anti-Semitic. They found no evidence and determined that Walt had no anti-Semitic tendencies.

Many Jewish employees at the Disney Studio over the years have confirmed that Walt had no negative attitudes towards men or women just because they were of the Jewish faith. Walt's daughter, Sharon, even dated a young man of the Jewish faith with no objection from either Walt or Lillian. Animator Joe Grant, who was Jewish, has stated: "As far as I'm concerned, there was no evidence of it and I think that the whole idea should be put to rest and buried deep."]

All the interviews I read throughout the years do point in the exact same direction.
Posted by Didier Ghez at 2:51 AM