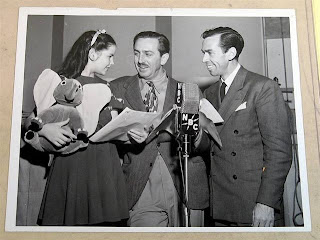 This just in from Jim Korkis:
[eBay has been offering some wonderful previously unseen photos of Walt Disney although sometimes a photo may be misidentified.
The caption for this photo said that Walt was appearing on an unnamed radio show in the 1930s but that sure looks like a Dumbo stuffed toy that young lady is holding which would make it at least 1940 if not later.
Voice artist and writer Keith Scott is the expert on Disney on radio so maybe he might be able to identify this radio show and the two folks with Walt who look very familiar.]
Speaking of ebay, Michael Barrier also recently found a Disney history-related photo whose context he explains this morning on michaelbarrier.com.
Posted by Didier Ghez at 12:48 AM

I'm sure someone will come up with a definitive answer, but I'll take a guess, even though the only thing in the picture I'm fairly sure I can identify is the RCA 77 microphone. If the presence of Dumbo is a red herring (or a precursor to the first re-release, in 1949) then I start thinking maybe it's on or about June 7, 1948, when The Camel Screen Guild Theater broadcast a version of "Snow White" starring Margaret O'Brien on the NBC network. Could the girl be Margaret O'Brien? Her age looks about right for 1948, and Disney wanted her to portray Alice in "Alice In Wonderland," which started recording about a year later. Guy on the right? Not even a guess. You can compare MO'B pictures at my page entitled "M'OB Rule" at http://tinyurl.com/2ev33d.

The girl in the mystery photo is Sharyn Moffett, not Margaret O'Brien. Margaret wore a ring on her right hand, not her left, and her hair tended not to fall in such silky locks when it wasn't in pigtails. Sharyn was a cute, but less famous contemporary of Maggie's. They co-starred in "Her First Romance" (1951).