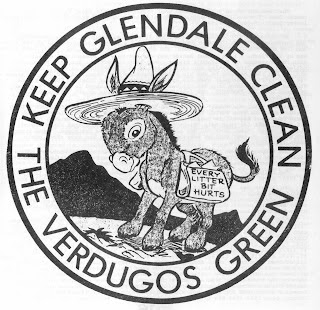 Speaking of Taliaferro, an old friend of mine who used to live in the US, sent me a few months ago this drawing that Wade mentioned in his article this morning.

[In 1967, Taliaferro drew a very "Disneyesque" burro for Glendale's anti-litter campaign. Here is a copy of Taliaferro's original design that appeared in full color on the trash cans in Glendale for over a decade. The Spanish influence in the drawing is because the city of Glendale was part of the Verdugo Ranch when Spain ruled California. Glendale still uses this character that has been named "Litter Not". He is the official mascot of the Committee for a Clean and Beautiful Glendale although they have eliminated the sombrero.]
Posted by Didier Ghez at 3:08 AM

Wow, was I surprised to see this! At some point, Litter Not was deemed to be insulting to Latinos (the term "burro" is apparently a slur) and there were tentative plans to replace him. Instead they made him a bit more generic (no sombrero), although the local schoolkids seemed to love him just the way he was.