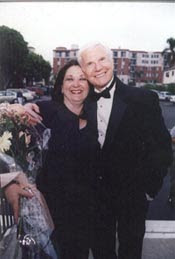 A.J. Carothers, best-known for writing the 1987 Michael J. Fox movie "The Secret of My Succe$s" and Fred MacMurray's 1968 film "The Happiest Millionaire," died of cancer April 9 in Los Angeles. He was 75.

A Los Angeles memorial service will be held at 2:30 p.m. April 29 at Westwood Presbyterian Church.

He wrote more than 100 other motion pictures, television shows and stage plays during his 40-year career.

Born in Houston, Carothers was only 9 when he wrote his first story -- a murder mystery -- and sold it to a classmate for 15 cents.

He began his professional career as a story editor for the CBS-TV show "Studio One," and then as associate producer of "Playhouse 90" and "GE Theater."

Carothers worked closely with Walt Disney for seven years and delivered a eulogy at Disney's funeral.

While under contract with Disney, Carothers wrote "Miracle of the White Stallions" and "Emil and the Detectives."

Carothers went on to write "Never a Dull Moment" starring Dick Van Dyke and "Hero at Large" with John Ritter.

He penned episodes of many popular television shows, including "My Three Sons," "The Dupont Show with June Allyson," and a musical special for Bing Crosby. He created the ABC television series "Nanny and the Professor, starring Juliet Mills, and the CBS series, "Goodnight, Beantown," with Bill Bixby and Mariette Hartley, for which he also served as executive producer. His motion pictures for television include "The Thief of Bagdad," "Forever," "Goldilocks," and "Topper Returns."

In later years. Carothers wrote the book for the 1996 stage musical "Busker Alley," which starred Tommy Tune and toured the nation.

He also wrote speeches for figures including Nancy Reagan, and wrote the scripts for the Music Center Spotlight Awards since its inception in 1988.

Carothers is survived by his wife of 47 years, Caryl; three sons, Andrew; Cameron and Christopher, an actor; brother; a sister and four grandchildren.]