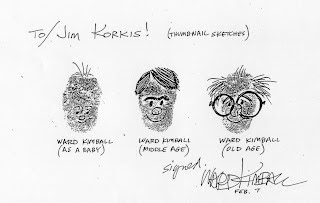 [Perhaps it was the way I was raised to respect people's privacy but I have always had trouble asking for an autograph from some of those people I admire. It always seems like I am intruding or bothering the person. In fact, when I develop a friendship with that person, it makes it even more difficult because I see so many other people aggressively pursuing an autograph on multiple items at the most awkward times.

One of the first Disney animators I met and interviewed was Jack Hannah. After about three years of knowing Jack, I finally worked up enough courage to ask for an autograph. "It's about time!" laughed Jack. He taught me that some of my heroes were very gracious and very flattered when asked for their autograph if they were asked at the right time (not in the middle of eating a meal, for instance) and if they believed the person asking was sincere and appreciative.

Sometimes, these folks are gracious enough to do a quick sketch in addition to an autograph. I thought I would share with your readers two items from my collection in the hopes they might consider sharing some of their treasures with the rest of us.

In the Seventies I first met Ward Kimball and got to visit the Grizzly Flats Railroad in his backyard. Thinking this might be a once in a lifetime opportunity, I asked Ward if he might be willing to do a quick sketch and an autograph. Since we had been discussing the importance of quick thumbnail sketches in plotting out a sequence of action or a story point, he literally inked up his thumb and made three impressions and then transformed them into the history of Ward from baby, to classic Ward to old age Ward.

Chris Bailey directed one of my favorite modern Mickey Mouse cartoons, "Runaway Brain". After ten years at the Disney Studio, he left to pursue other projects including a character that he created named Major Damage. I wrote a fan letter to him, mentioning not only how much I was enjoying his Major Damage character but that I enjoyed his work on "Runaway Brain" and I received this wonderful pencil sketch shortly afterwards.] 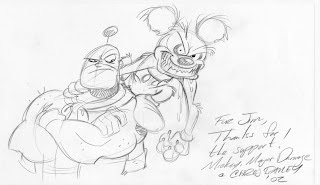