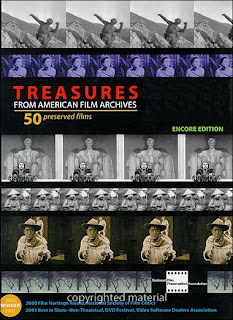 This just in from Rob Richards:
[Your blog readers might be interested to know the silent film SNOW WHITE (1916) that so inspired Walt Disney is now readily available on DVD.

It is part of a collection titled Treasures From American Film Archives (DVD, 2005).

50 Preserved Films
For the first time ever, America's film archives are joining forces to release their most exciting, unseen treasures on DVD. Showcasing the variety of American films produced in the United States over the last hundred years, the 50 films in this four-disc set have been meticulously preserved by eighteen of the nation's premier archives, including the Library of Congress, the Smithsonian, the Museum of Modern Art, George Eastman House, UCLA, and the Academy of Motion Picture Arts and Sciences.

It is available from several sources, including:

I ordered my set from DVD Empire. It arrived very promptly. SNOW WHITE was very interesting. Obvious where many of the Disney ideas came from, yet the Disney version was brimming with original ideas as well. The film has a beautifully presented piano accompaniment.
The set includes a myriad of intriguing films (including Groucho Marx's 1933 home movies!). Of course SNOW WHITE is the film of interest to Disney aficionados.

Rob Richards]
Posted by Didier Ghez at 1:24 AM

The acclaimed Once Upon a Time Walt Disney exhibition that is currently in Montreal will not come to the United States, but it is likely that a similar exhibit of Disney art will, says Lella Smith, director of the Animation Research Library. ...