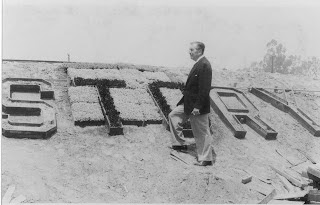 [Even though I have quite a collection of Walt photos including some that are very out of the ordinary, when I saw this photo advertised on eBay, I knew I wanted it even if it meant I had to eat candy bar lunches for a week. As a kid, in order to get extra money to buy comic books on the way home from school, I would only use enough of the lunch money my parents had given me to buy a candy bar to sustain my energy through the day so I could use the rest to buy reading material.

I think most people will look at this photo and see Walt standing on the uncompleted hill of the Storybook Land boat attraction at Disneyland. However, when I look at the photo, especially the way it has been cropped, I see the huge word "Story" that is larger even than Walt himself. Walt is standing up for the importance of story in the overall picture. Notice that the only area that is completed is the section where Walt is standing. Walt is also gazing off past the horizon, his eyes wrapped in thought about the next step as well as the final vision. All the other elements in the picture from the background to the foreground are minimized and gray. Once the Story is completed and strong, it will bring those other elements into better focus. I knew I wanted this by my computer when I churned out articles to remind me about Walt and his belief in the importance of storytelling. I make no apologies for being a sentimental Disney Geek who still gets a kick out of things like this picture.]

That is a FANTASTIC shot of Walt in Storybook Land. Thanks so much for posting it and your thoughtful description!

Wow. I saw the pic and the same thing struck me. I knew what your post would say right away. Fantastic image. Thanks for the large scan too!

Amazing shot. How has this not become one that is so popular?

Haha, I saved my lunch money too. Great photo.

I love your take on this photo. Three cheers for Story!!!