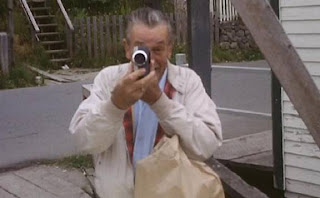 I will be in London most of next week and the blog will probably be quiet until Friday. I have one more photo from Mark Sonntag's collection to post. But for now, I would like to share one kindly sent to us by Jim Korkis:
[Since there was such a favorable response to the last photo I contributed, I thought I would share another photographic treasure from my collection. This is one of the last photos ever taken of Walt Disney.

Several months before his death, Walt gathered his entire family together for a cruise up the coast of British Columbia where the family celebrated not only one of his granddaughter’s birthdays but his wedding anniversary. While his sons-in-law would go salmon fishing in a little dinghy, Walt spent quiet time on the deck reading books about city planning in preparation for Epcot and about colleges in preparation for California Institute of the Arts. Ron Miller, Diane Disney’s husband, described Walt as “serene” during the cruise even though it rained during much of the time.

I like this photo because you can see Walt smiling behind that home movie camera and it looks like he is taking great enjoyment in filming whoever is looking at this picture. If you ever get a chance to see his home movies, there are long segments of things like crabs scuttling across the sand. Walt just had a childlike sense of wonder about the most common things and little things gave him great joy.

It gives me great joy to know that Walt had a fun and fulfilling family vacation shortly before he had to suffer such pain in the hospital.]
Posted by Didier Ghez at 1:29 AM