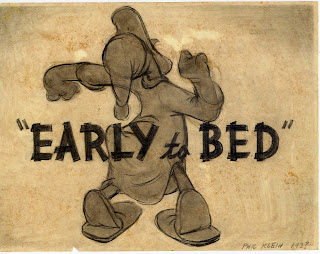 Great title card from the Donald short Early to Bed, designed by Phil Klein and coming from the collection of Mark Sonntag.
About Phil Klein: Phil was Izzy Klein's brother. Here is what Izzy mentioned about him in a Cartoonist PROfiles article that I will republish in Walt's People - Volume 6:
[My younger brother, Philip Klein, was an assistant to animators at the Studio at that time. One of his jobs was to work with the cameramen. When they had a vertical, north-south zoom-in, Phil stood somewhere on the back of the camera-stand and operated the down movement of the zoom while the cameraman did the rest of the operation of changing cels and shooting the picture.
Philip Klein got his start in the animation industry at the Van Beuren studio in New York. He came to Disney in Hollywood in 1937 as an assistant in animation. When he left the Studio four years later he was an animator. He took advantage of the educational processes in progress at the Studio. There were classes in every phase of the animation field. The Disney Studio was a college in animation in all its categories. The working population of the Studio in the late 1930s was between a thousand and twelve hundred. I believe that was the peak.
The Disney Studio's system of specialists went into using certain animators for animating Pluto because they were particularly good with that cartoon character. Others were good with Donald Duck. There were "clean-up" men also capable in that particular direction. In fact the Donald Duck clean-up men often kept the character of the Duck from drifting away from his design on the model charts. Phil Klein, for a period of time, was a Donald Duck clean-up artist. He also drew some of the Donald Duck model charts showing the correct way to draw Donald in various poses and angles.]
Phil Klein seems to have been very active in the cartoonist unions and left after the strike. Tom Sito mentions him several times in his new book.
Posted by Didier Ghez at 1:33 AM