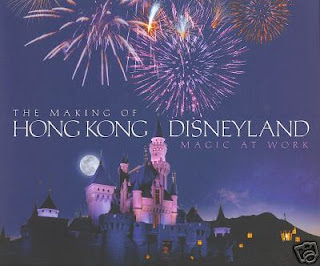 Some pieces of information are both good and frustrating. I just heard yesterday from Jim Korkis that a book titled The Making of Hong Kong Disneyland by Mel Malmberg (Roe Rohde's wife) had been released a few weeks ago by Disney. That's the good news.
The bad news is that it was given away to Cast Members and is not sold anywhere. Oh well...
[More details from Jim Korkis:
The Making of Hong Kong Disneyland: Magic at Work by Melody Malmberg (author of The Making of Disney's Animal Kingdom and wife of Imagineer Joe Rohde).

Reportedly given to cast members who helped with the opening of Hong Kong Disneyland. One hundred additional copies were available through Imagineering's Mickey's of Glendale company store in Southern California where they sold for forty-five dollars a copy plus tax. They disappeared within days of being listed.]
Posted by Didier Ghez at 12:42 AM