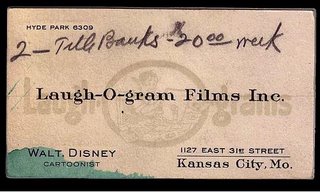 Here is the description from the auction:

Bert Sylvester was right in the center of moviemaking during the early Hollywood years and would very easily have known and worked with Walt Disney in any number of ways.

This card has been authenticated twice.First, it was confirmed by a dealer in Disneyana who surmised that the handwriting on the card must be Walt Disney's own and that this is in fact, a contract by which Walt promised to produce title cards (or "banks") for some vendor (perhaps Bert himself) who wished to use them in a film or in a movie house, projected onscreen between films. Since the card still has Walt Disney's Kansas City address, it is likely that he handed this out when he first arrived in L.A. in (1923).

The second authentication came in 2003 when Antiques Roadshow came to my hometown of San Francisco. I signed up for an appraisal just to see if this card was real. The woman who appraises collectibles and sports memoribilia took a look at it and claimed that I had found Walt's "Rookie Card".

Some further comments from me:

The drawing inside the “O” in the “Laugh-O-grams” logo is the same drawing Walt made to his letterhead in the early 1920’s.

My theory is that this card shows that Walt rented 2 rows (banks) of light for his camera stand (normally used for shooting titles as well as animationb) for $20 per week. The handwriting (especially the "B") looks very much like the handwriting on documents used in the Laugh-O-grams bankrupcy case as shown in the book "Walt Disney's Missouri." It is not explained who wrote on those documents.

The first time I saw the Red Lyons card was, I believe, in a great article by Dave Smith in Funnyworld #19, Fall 1978, "Up to date in Kansas City."

I put a close-up of the graphics on the card up on my blog to see "Walt at his desk."