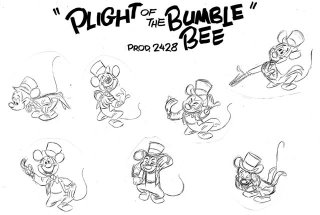 More on Plight of the Bumble Bee! Here is an email I received last week from artist Daan Jippes:

A friend of mine, Wilbert Plijnaar, currently storyboarder at Walt Disney Feature Animation and involved with How to Install your Home Theatre, the new Goofy short, recently brought up the subject of Plight of the Bumblebee, as he was doing research in the morgue on unfinished projects from Disney's past.

Before I became storyboarder myself there in 1989, I spent the years 1981-1988 across from the Animation Building on the lot, in the R.O.D.-building, employed at Consumer Products/Publications.

In 1981, in the Disney Archives, I stumbled upon an indexcard with the intriguing header Plight of the Bumblebee, indicating the subject, the year, and the, then current, location on the backlot (!) where the materials relevant to the aborted production were stored.

This turned out to be in the loft of the "woodshed", a structure erected mostly from corrugated iron and wood where, in those days, attractions for Disneyland were being assembled. My find existed of 3 dusty cardboard boxes, filled with stacks of animation-paper, X-sheets, rough layouts and photographed storyboards. From the X-sheets, all of which bore the production-number 2428, it was easy to identify the animators.

I clearly remember Hal King there, and mybe Cliff Nordberg. And a Dick or Don... something... a shorts animator, in any case. The fourth animator didn't require checking the X-sheet for, it was obviously Freddy Moore!

From 7 extremes out of his stack I composed a modelsheet; did some fancy "dancing"lettering for the title and presto: presumably the "modelsheet"that Floyd Gottfredson had seen, for I made a bunch of photocopies for several interested parties over at Feature Animation.

Later on, I was told, Burny Mattinson had filled in the holes in the surviving animation and put it all on reel.

Early 1999, when I storyboarded on the t.v.-series "Mouseworks", there was talk of using "Plight.."as a short for that show.

The assigned director in 1951, Jack Kinney, I met in 1988 at a booksigning in Toluca Lake, for his autobiographical Walt Disney and Assorted Other Characters. I told him about Plight's plight, so far. On hearing me out, he was delighted and sad at the same time. Sad because he remembered it as the promising "blank"on his palmares that it was.
Anyway, "Old Banananose"got over it by dedicating my copy of his book with a flourish.]

The modelsheet assembled by Daan is reproduced here.
Posted by Didier Ghez at 12:54 AM