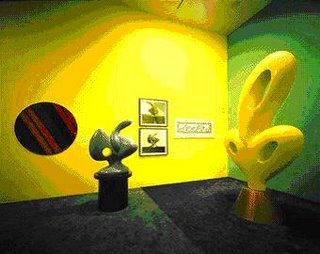 Armando Botto was kind enough to send me the final piece of the Bertrand Lavier's puzzle that Are Myklebust submited to the blog last week.

[I confirm that the story is Sergio Asteriti's The Artistic Thief (http://coa.inducks.org/story.php/x/S+73215//).

Interestingly enough, your version has been edited to adapt the Italian 2-panels-per-row format to the French 3-panels-per row; the abstract paintings in the middle column of the French edition were not present in Asteriti's artwork. Also the big sculpture on the bottom-right of the first page was added by your editor!

The first French publication of the story isn't indexed yet in INDUCKS, but it probably took place in Le Journal de Mickey around the mid-Seventies. Maybe the "1947 Disney cartoon" was in fact a typo for "1974 Disney comic".]