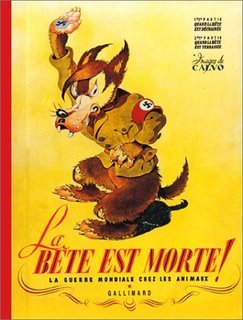 La Bête Est Morte! is a graphic novel published in France in 1944. Written by Victor Dancette and Jacques Zimmermann and illustrated by Edmond-François Calvo it tells the story of WWII and the fall of Hitler using satirical animal characters.

The wolf on the original cover of this book was clearly inspired by The Big Bad Wolf, which lead to the Disney Studios asking for its design to be modified.

I have been contacted by David Calvo, grandson of Edmond-François Calvo, who is trying to write an article about the conflict between Disney and his grandfather. I was wondering if any of you would have material on the subject.
Posted by Didier Ghez at 6:16 AM

Too bad in the six years since this post was written that nobody has came forward to add their two cents to the comments. At least you tried.