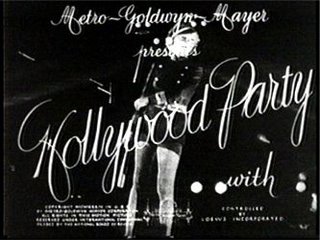 Following up on my posts about the movies Hollywood Party and Servants' Entrance, Are Myklebust sent me the following email:

[After I read about the movie Hollywood Party (1934) on your blog, I decided to set up a list over classic "non-Disney" movies with some kind of "Disney" connection in them.

Important: I haven't seen all those movies myself, so the information for the ones I haven’t seen is based on what I have found in cinema related books or on the net.
The ones I haven't seen are: Betray My Lips, Servants' Entrance, Babes in Toyland, Sullivan's Travels and Once Upon a Time.
The others are based on my own observations.

M (Germany, 1931):
In this masterpiece by Fritz Lang we can see some Mickey Mouse figures at a drug store.

Hollywood Party (1934) (MGM):
Features a short b/w combined animated/live action sequence with Mickey Mouse and the actor Jimmy Durante and a Silly Symphony-sequence in colour: The Hot Chocolate Soldiers made by the Disney Studio.

Babes in Toyland (1934) (Hal Roach):
Some dolls of Mickey Mouse and the Three Little Pigs play a very small part of the story line in this Laurel and Hardy film.

Modern Times (1936) (Charlie Chaplin):
In a short sequence Paulette Goddard picks up a Mickey Mouse doll in a department store and holds it up in front of Chaplin.

Sabotage (Great Britain, 1936):
In this thriller, directed by Alfred Hitchcock, there is a sequence where Who Killed Cock Robin? is shown in the background in a movie theatre. According to the credits this is done after “an appointment with Walt Disney”.

Sullivan’s Travels (1941) (Paramount):
A part of animator Norm Ferguson’s famous flypaper sequence from Playful Pluto (1934) is shown in this movie.

Once Upon a Time (1944) (Columbia):
In this Cary Grant movie an actor with the name Walter Fenner gives an uncredited performance as Walt Disney.

Brief Encounter (1945, Great Britain):
In this great movie directed by David Lean, Trevor Howard and Celia Johnson visits a movie theatre. We hear Donald Duck in the background, and both of them utter their fondness for the duck.]

I can name a couple of other non-Disney films with Disney connections:

And a more modern connection:

A Christmas Story (1983): During the town Christmas Parade, the big movie featured with characters is The Wizard of Oz. At one point, the winged monkeys all decide to attack a Mickey Mouse walking in the parade.

The use of Playful Pluto in Sullivan's Travels is significant and deserves elaboration - it's actually the entire justification for the film and the filmmaker.

The film was directed by Preston Sturges, a very famous and popular maker of comedies in 1941. The film is about a very famous and popular maker of comedies who seeks the justification of having created an important, worldly, serious film, which he wants to call "O Brother, Where Art Thou?" (Yes, the Cohen Brothers got the title of their movie from this). His bosses contend that he, the blessed-with-luck young man, doesn't know enough about being miserable to make an important film. He responds to this by setting out on the road to learn what it's like to be miserable.

Anyway it's a hilarious and brilliantly written film. In the end of the film he ends up in the chain gang and has basically lost all hope. The chain gang is lead into a church where the Disney short is played. The entire group breaks into uproarious laughter immediately and he, initially disdainful of the short, begins to laugh too. After he's rescued from the chain gang he says: "I'm not going to make O Brother, Where Art Thou! I'm too happy to make O Brother, Where Art Thou!" and he cites the simple but noble relief from the grinding existence of labor that the Disney short provoked in the cons. He then goes on to state in no uncertain terms that making funny movies which make people happy is just as important as making serious, important films on issues of the day. Sturges uses the Disney film to justify his entire career.

I'd like to add "Bachelor Mother" (1939) starring Ginger Rogers. She works in Merlin's department store which sells many toy Donald Ducks that are roaming around quacking. That toy duck features frequently throughout the film. Very cute film!

Universal's 1962 feature "40 Pounds of Trouble", starring Tony Curtis and Suzanne Pleshette, is the first non-Disney motion picture to use Disneyland as a location.

Sorry to come to this party, I mean post, late. There was a post today about it. That was in my head as I was flipping through channels tonight and came across the Charlton Heston classic, The Greatest Show on Earth. A movie about the circus. As the performers are getting ready for the finale, you see a group of guys run for their costumes which are Mickey, Pluto, Donald and other characters. They then walk around in the parade. There is even a cut to a middle aged guy watching the show, saying around a mouth full of hot dog, "There's Mickey".