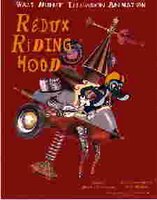 Dewey McGuire was kind enough to send me scans, yesterday, of all the articles I wanted to read in Animato! issue 39.

One of these articles intrigued me due to its title: Redux Riding Hood - Disney's Forgotten Short. After having read it, I must admit that I am even more intrigued...

The article mentions 4 shorts of very good quality (at least 3 were of good quality according to the article - one was apparently cancelled because it was bad) produced by Walt Disney Television Animation (of all places! - Not that I have anything against the artists there, don't get me wrong, but I am a "purist" when it comes to animation and therefore like full animation or productions with strong scripts and high artistic values when it comes to limited animation).

One of the shorts, Redux Riding Hood, was so good that it was nominated for the Academy Awards in 1998. The other two (apparently good) shorts were Jack and the Beanstalk and Darrol Rooney's The Three Little Pigs.

I have not seen any of these shorts. Can anyone tell me more about them? Were they ever released on DVD or elsewhere? Who directed Jack and the Beanstalk? Have Jack and the Beanstalk and Darrol Rooney's The Three Little Pigs even been seen, even if just in the Festival circuit? Are those two as good as Redux Riding Hood?

I freelanced some storyboarding on "Three Little Pigs" for Darrell Rooney(I was working at Turner feature animation development at the time, where I'd met Darrell)--I believe Ricky Nierva, now at Pixar, and Scott Morse(also up there at P) did freelance boards too(Ricky, who is a brillaint young designer, might have done the character designs as well--I'm not sure--can't remember).

I never saw the finished product, either, though--why Disney never released them is a mystery to me, but they were having a kind of rollercoaster of management at that time, and perhaps a new exec in charge couldn't see a venue for them. They were at one point supposed to be released on a home video(now it'd be a DVD, of course). I'd be surprised if they stayed unseen forever.
I can't remember what the "4th" film was...hmmm...it's about 10 years ago now.

I saw "Redux Riding Hood" at an animation festival (don't remember which one... Ottawa '97 maybe?) and found it absolutely fresh and hilarious. One of the more memorable shorts I've seen. Count me as one of the folks who'd love to have it on DVD!

I worked a little on Redux Riding Hood and like you guys am interested to see it rereleased. The animation was done down in New Zealand, or at least what I saw of it was. I ended up moving on from that studio midway through production and I never saw or heard anything from it after that. I've checked YouTube and other sites a couple of times to see if anyone has posted it, but no such luck.

Well, here is that film for anyone who bumps by here!
http://www.youtube.com/watch?v=dPDVdFS5p1g