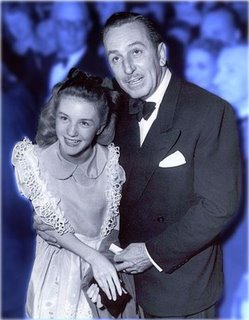 I was working this weekend on the interview with Winston Hibler by Richard Hubler that will appear in Walt's People - Volume 5 and loved the following story:

"We were casting for Alice in Wonderland and for a long time we had been trying to get Margaret O'Brien. Walt was very high on her but we had real trouble making arrangements. She was either committed or she was somewhere else. Meantime we had been auditioning girls and came up with Kathy Beaumont, who eventually played it, and Walt liked her very much. While we were playing the audition, Hal Adelquist, who was running animation in terms of management at that time, said to Walt, “You know Margaret O'Brien is available right now.” Walt said, “No, she's in England.” Hal said that her agent had called him and that she was back in New York now. Walt is listening to little Kathy, you see, and he looked at Hal and said (with emphasis), “She’s in England, Hal.” So we got the message and we cast Kathy Beaumont."
Posted by Didier Ghez at 1:53 AM