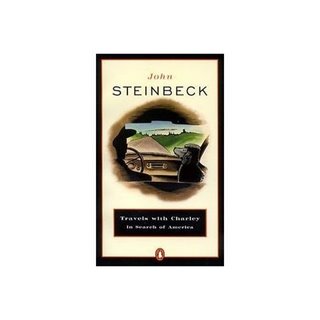 I love Steinbeck's novels. In fact, his masterpiece East of Eden has been in my list of favorite top 5 novels of all time since I read it earlier this year. It was therefore with absolute delight that I read the following story a few days ago in an interview with Donn Tatum that will appear at some point in the future in Walt's People:

The agency kept saying to us, “Look there is so much being said today about what's wrong with America… We’re not trying to say that everything is right about it. But, on the other hand, there are a lot of things that are right about America and what we would like to do is find a program—or any number of programs—that could be directed toward the theme that there are a lot of constructive things about the U.S. today. So do you think you would be interested in that?” […]

In subsequent discussions Walt said, “You know, I read a book called Travels with Charley by John Steinbeck. To me that was a very interesting book and, of course, it's a device for what DuPont wants here, if what they want to do is do programs about America that are dramatic and entertaining but constructive in terms of what America is and some of the good things about it. It seems to me that traveling around the country as Steinbeck did with that dog makes an interesting approach.” The DuPont had said that they weren’t set on any number of programs. They just wanted to do whatever number was logical.

[…] As a result Walt and Steinbeck spent several hours together in New York discussing this. Steinbeck was generally agreeable. He didn't want to participate personally, he didn't want to write it or anything like that, but he would be interested in participating enough to be entitled to a credit.

Of course by that time the network, and even DuPont and the agency were thrilled to death that they were maybe going to get one or more television programs out of Walt Disney and John Steinbeck. It was at that point that Walt suddenly called up and said, “You know, I’ve been thinking about this thing and all I’ve got to do and all that we’re involved in here. I’ve just written Bud Stefan a letter...” The letter said that he just didn't think it was fair to them for him to try to take on anything more because he just didn't see how he could do it justice and he didn't think it was fair to his company for him to try to. So it came to naught."

I came across this story and find it fascinating. I work for the National Steinbeck Center and would love to be directed to the interview with Donn Tatum you were referencing. Please contact me via the Steinbeck Center website.