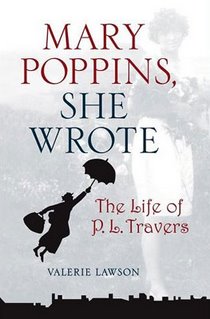 I just discovered the book Mary Poppins, She Wrote: The Life of P. L. Travers thanks to this morning review on JimHillMedia. Despite the flaws that Jim underlines, I will defintely add it to my library, if only because it will serve as a key complement to one of the interviews that will appear in Walt's People - Volume 4. The interview I am refering to is that of Brian Sibley, who Jim mentions in his article. Brian, author with Richard Holliss of The Disney Studio Story was kind enough to tell me the full story of the planned and never-produced Mary Poppins sequel. Yes, Brian reveals who was considered by the Studio to play Bert's brother, Barney. Be ready for a shock!

Another review worth reading is that of Russell Merritt and J.B. Kaufman's Walt Disney's Silly Symphonies: A Companion to the Classic Cartoon Series on CartoonBrew, a book which I have not yet received but that I know for a fact will be one of the three "must-have" of the season (along with Gabler's bio of Walt and Tom Sito's Drawing the Line).
Posted by Didier Ghez at 12:44 AM