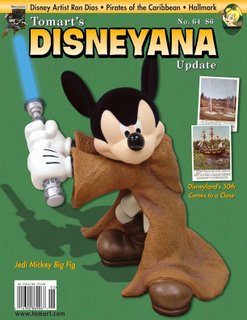 I have mentioned in several posts within the last few weeks the series of 3 articles Kaya Özkaracalar has prepared for the magazine Tomart's Disneyana Update, as part of my column on vintage European Disneyana, focusing on pre-WWII Disney comics in Turkey.

For those interested, the first of those 3 articles has just been released this week in Tomart's Disneyana Update issue 64.