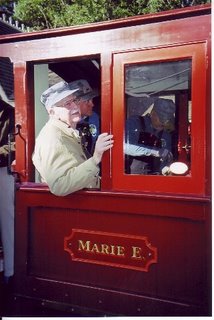 Tomorrow will mark Ollie Johnston's 94th birthday. To celebrate, here is an excerpt from an interview conducted with him in 1972 by Christopher Finch and Linda Rosenkrantz that will appear in a future volume of Walt's People:

"George Sanders: I thought he was just fabulous as Shere Khan. He’s so aloof. We tested him for Prince John too, you know. Woolie tested him over in England, but he wasn’t near as good as Ustinov.

Did you hear about here at lunch, when he was recording for Shere Khan in Jungle Book. Towards the end of it Larry [Clemmons] asked him if he'd like to have a picture or a drawing of the tiger. He said that would be all right. He went on eating and then Larry says, “Would you like to have Walt sign it?” And he says, "How utterly absurd!" Nobody was important to him, that's the only way I can see it.

We heard that same day, when Terry was telling that story, somebody else was telling us that his brother had been living destitute in Venice, California, and Sanders was living in Beverly Rills or Bel Air. And when Tom Conway died they got in touch with Sanders and said, “Why didn't you help him?” and Sanders said, “Oh, we haven't seen each other in years.” He couldn't have cared less.

Eva said that he was the coldest person she'd ever known and knew him fairly well through her sister. She said he was just absolutely cold. But he fitted that part so perfectly. I think we've had awfully good casting. And Sterling Holloway was so good as Kaa."