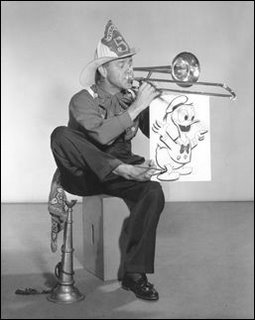 A lot of excellent reading this morning. Steve Hulett has posted two more of the interviews he conducted in 1978. One with Ward Kimball (part 1, 2 and 3) and one with Wilfred Jackson. I am happy to say that Walt's People played a small part in getting those interviews back to the surface.

Toons at War has a whole series of great new posts, including one about Hank Porter that I particularly loved to read.

The site of the Walt Disney Family Foundation was recently updated and contains great new material including an interview with James Algar and one about Walt appearance in front of the House Committee on Un-American Activities (HUAC). Not one of Walt's most inspired moments.

A Films published two nice images from Walt's commercial ventures (image 1 and 2 can be found here).

Finally, I should mention that the Disney Books Network was recently updated.