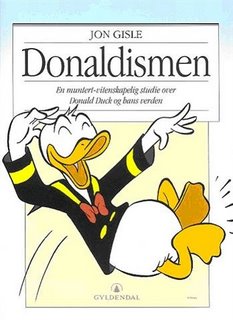 Here is one bit of news for our Swedish reading friends coming directly from Are Myklebust:

[The Norwegian book Donaldismen (“Donaldism”) from 1973 written by Jon Gisle, which sparked of a fan interest in Disney comics in Scandinavia and Germany, has been republished in Norway 33 years after its first publication in a partly updated version.

So what is “Donaldism”? Jon Gisle gives this explanation himself; “Donaldism is the research of Disney comics and/or the fan culture that is found among Disney comics aficionados.” (The term itself refers off course to "Donald (Duck)" + “–ism”, and was first used in an article by Jon Gisle in 1968.)

The book is not about the publication history of the Disney comics or the artists behind them, but a study of the society (read: “Duckburg”) as described in these comics, special the Donald Duck comic book stories from 1940s to 1960s. Ironical enough the book was not meant to be a book about Disney comics in itself, but to be a parody on academic studies of literature and society.]
Posted by Didier Ghez at 7:56 AM