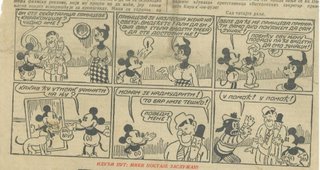 Here is the information I gave about Crtani Film in a column released in a past issue of Tomart's Disneyana Update: "On April 25, 1935 and until September 30, 1936, Mickey travelled to Zagreb, capital of Croatia. The magazine Crtani Film that would last little more than a year, had been created by Ivan Zrnic, distributed in both Serbia and Croatia and carried Mickey Mouse Sunday pages on its cover – recreated by little known Serbian artists."

This strip comes from issue 21.