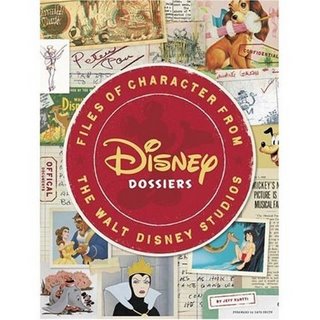 A fun new book by Disney Editions having just been released last week containing quite a lot of rare Disney artwork, I have asked its author, Jeff Kurtti (well known to most of you) if he would accept to write a short "making of" article for this blog. He was kind enough to do so.

Disney Dossiers: Files of Character from The Walt Disney Studios is a collaboration between Disney Editions and becker&mayer! (they're the publishers of Disney archivist Robert Tieman's Disney Treasures and Disney Keepsakes books.) They brought me in for my Disney knowledge and off-kilter world view. ;-)

The idea was straightforward, but the solution was complex.

There was a desire to put out a volume that dealt with the wide-ranging stable of Disney characters, but in a way that was not as structured and scholarly as John Grant's classic Encyclopedia (which has already seen three editions), that had some humor in content, and the always-clever b&m! design approach.

Although for obsessive folks like us it seems second nature, there are a lot of dyed-in-the-wool Disney fans (and new generations coming up) who don't know as much about the canon and characters as they want to, and to whom a consolidated entree to this information is a little daunting.

Our idea was to create an informative and intelligent book, but one that is accessible, unintimidating, and fun. A primer on the characters for the uninitiated, a new take on them for the fan, and most of all something that celebrates the characters and their stories in a way that invites the reader to explore, and has a tone that is both irreverent and respectful.

In approaching the illustration, we had access to the wonderful database of images from Disney Publishing's decades-long history, which have been organized under the loving care of Ken Shue, vice president and global creative director of Disney Global Books. There is wonderful stuff in there from Golden Books, Whitman books, and the like, dating back to the 1940s, maybe even before. (The key front art of the Pinocchio Golden Book that I grew up with is on the lower left of the Dossiers cover).

In addition, we called on fellow Disney writer/historian and longtime pal Jim Fanning to bring his unique eye for unusual and rare art work to the project. He was our man in the Walt Disney Feature Animation Research Library and the Walt Disney Photo Library, and his instruction was to avoid the cel set-ups and publicity images that are always floating on top for the easy grab, and to find the less-seen (and frankly oddball) art, as well as character poses and uses that are less-seen.

We organized the material in an intentionally non-chronological fashion, more by types and sub-types. Our thought was that the fans already know the chronology, and the casual reader doesn't know--and quite probably would be puzzled by a rigid chronology.

The concept we hit on was simply to (as we should) treat the characters as real personalities, and (as the Archives has with real humans), present a simple file folder full of assorted materials. That way we could present a variety of complexity of information, but in digest form, often as "notes" that are "clipped" to the files, asides, and brief data.

The overall conceit of the material, then, is that you are in receipt of a set of dossier files on a broad assortment of Disney's great animated stars (we even got Dave Smith in on the joke--the introduction is a "letter" from Dave, explaining to the reader--or "researcher," in this case--what these files are for).

Finally, in the hands of Senior Editor Jody Revenson and Editorial Assistant Jessica Ward at Disney Editions and the becker&mayer! editor (Amy Wideman) and designer (Megan Noller Holt) all of these ideas and material were brought together in a rich presentation that I'm sure even the most scrupulous Disney fan will find refreshing, entertaining, and really out-of-the-ordinary.

I am really proud of the finished product, and hope that die-hards and newbies alike enjoy the book as much as we enjoyed making it--and as much as I still enjoy leafing through it time and again!