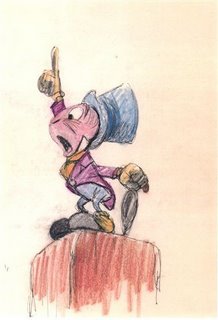 This story is becoming fascinating thanks to a post by Joakim Gunnarsson "There was an illustrated Chicken Little storybook probably done in the mid 70's (?) illustrated by Tony Strobl. (Released in Scandinavia as a part of "Kalle Ankas bokklubb".) It featured Donald, Goofy and several other regulars. If my memory serves me right the design on the drawing you have reminds me of Strobl's artwork in that book. But it was a looong time ago I last saw that book. Could it be that the project that Ken worked on got shelved and the script etc. ended up in the department wich handled the story books and they used it as a basis for one of their books?"

And I answer: Yes, that's clearly possible. It would be a similar situation to The Gremlins project.

Would anyone have access to the book that Joakim mentions above?
Posted by Didier Ghez at 5:17 AM

Let me know if you find that book! I had it as a kid and the memory of it haunts me!