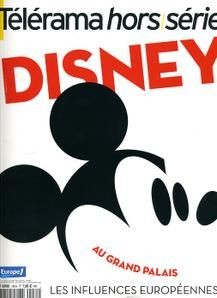 I remain pretty swamped at work and things are not getting better (don't worry, I love it), which explains my weird silence of the last few days. I also still have not received the photos I need to cover properly the Il Etait une Fois Walt Disney exhibition at the Grand Palais, but I have decided to start tackling the subject, mentioning various odds and ends before staring it in the eyes, hopefully next week. If you really can't wait, speak French and want to start somewhere, check the Disneyland Resort Paris fan site. They are theme park enthusiasts, so their focus is slightly weird, considering that the exhibition is mostly about animation, but it will sort of give you a feel of the place and of the size of the event.

So what is it all about? There are a few events that count as the most important in my life as a Disney enthusiast. One is the first interview I conducted with Disney artists (the Brizzi brothers at the Disney Studio in Montreuil), then there is the inauguration of Disneyland Paris in 1992. But above and beyond all this stands the inauguration of last week.

Let me try and explain why even while typing this I start getting goosebumps. Picture first the fact that this exhibition is taking place at Le Grand Palais, which along with Le Louvre and Le Musee d'Orsay is one of the most prestigious museums in Paris. It's the equivalent of the National Gallery in London or L'Hermitage in St. Petersburg. That's a good start but is far from enough.

A lot could still go wrong at this stage. The works displayed could have been badly chosen: say that the curator decides to focus only on cels and backgrounds, final shots from Disney movies, Disneyana material, the life of Walt Disney. None of this would make sense in the context of Le Grand Palais. The exhibition could be too broad, covering the current works of the Studio and therefore venture into the commercial realm of Disney. Still a mismatch. All those pitfalls were avoided by the curator of the exhibition. Pretty amazing feat for an outsider! He selected only beautiful mostly never-seen-before artwork - especially concept art - and made sure the only movies featured were those that Walt had personally supervised.

But once again at this stage the exhibition would only be extremely good, not yet great. It would be what we have seen before a few times: a beautiful homage to the art of Disney (like what is currently happening in Japan), which would satisfy Disney enthusiasts and cater to animation fans. What brings the whole thing to another level is the very concept of the exhibition: it is a quest to understand what works of art (especially European ones) inspired the art of Disney artists. Based on the seminal book of Dr. Robin Allan, Walt Disney and Europe, the Grand Palais exhibition displays works by the greatest European masters, like Gustave Dore, Heinrich Kley, or even Breughel, German expressionists and French architect Viollet le Duc alongside Disney concept art, layouts and backgrounds. And as all of you know, Disney's artists works do not pale in front of those of those masters. In fact the association is mind-boggling: if you are a layman, the quality of the concept artists' works become even more obvious and you start understanding that Walt had some really outstanding individuals working for him, that he was not the only one who drew everything and that the Studio was far from being a factory. If you are a Disney enthusiast you are bound to be stunned by connections with famous or less famous works of art from the past that you were not aware of.

Of course for Disney enthusiasts, the walls covered with Mary Blair and David Hall drawings (to name a few) help you reach animation heaven, as do the fact that most of the books that Walt collected during his 1935 trip to Europe are displayed.

And then weird things start happening: The French intellectual magazine Telerama (above) releases a special issue above Disney, and while one can feel that its journalists hate to love Disney, this simple event in itself is a sign that something strange is going on. Picture The New Yorker releasing a special issue about Disney and you will understand what a Frenchman can feel when he sees this. Or when the TV channel Arte dedicates a special evening to Disney and features Disney's Alice in Wonderland. In other words, there is definitely something bizarre going on in France at the moment and even though some in the traditional media like Liberation or Le Monde hated the exhibition, it is still obvious that for an honnest visitor (one not blinded by ideology) this exhibition should be a revelation about how much outstanding art was actually created by the Disney Studio, how little has been seen to date and how intimately linked it is to European cultural heritage.

I am convinced that a few persons will become Disney historians or at least serious enthusiasts after having walked out of Le Grand Palais. Our thanks go to an exeptional man for having achieved this feat: the curator of the exhibition, Bruno Girveau. It takes guts in France, in the artistic community to undertake and achieve such a project!
Posted by Didier Ghez at 6:56 AM