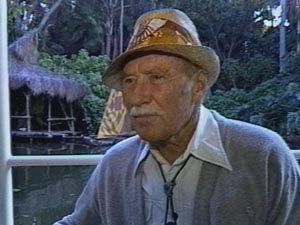 Here is the fourth of Jim Korkis' short stories.

For Volume 5 of WALT'S PEOPLE, I am currently transcribing my interview with the legendary Bill Evans who landscaped Walt's backyard and later Disneyland and Walt Disney World. Here is an early excerpt as well as a reminder to pick up the three volumes of WALT'S PEOPLE currently in print. Walt had been enthralled by the topiaries he had seen on his European trips and wanted something similar for Disneyland.

"There are a number of differences between our topiaries and the ones of legend that go back about 3,000 years. It's an ancient art. It takes about fifteen years to get it into a recognizable shape. That wouldn't do for Walt. He asked us if we could speed up the process a little bit. We told him we thought we might be able to give him something that was acceptable in a couple of years. The early ones were all Disney inspired like the hippos from FANTASIA," said Evans.

The first results appeared in Fantasyland in 1963 but the figures were later moved to their permanent location in the front of "It's A Small World" in 1966. The first animals included the hippos from FANTASIA but also Dumbo and was the start of a tradition at Disney theme parks worldwide.

There are over 120 shrub and 65 sphagnum character topiary throughout the WALT DISNEY WORLD Resort as well as hundreds of geometric and free-form topiary shrubs and trees. Pete's dragon, ELLIOT, is the largest shrub character topiary. Grown and trained for 10 years, this Podocarpus macrophyllus measures over 10 feet tall and 14 feet from head to tail.
Posted by Didier Ghez at 6:42 AM