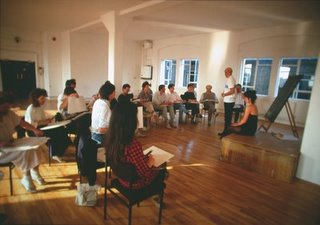 As for me, I found of particular interest some posts about animation and Disney artists:

The obituary of artist Bernard Wolf by Mark Kausler; an old post by Hans Bacher on his blog called A Tribute, that features quite a few photos of former Disney artists including Walt Stanchfield (left) - whom I had mentioned on this blog and whose interview will appear in a future issue of Walt's People, but whom I had never seen before; a more recent post by Hans called "some more history" that features photos of Eric Larson and of the Beauty and the Beast crew during a research trip in Paris; and two posts from the Animation Guild Blog: one about The Norconian party that followed the completion of Snow White and the Seven Dwarfs and one about Ken Anderson.

Enough to keep one busy for a while, I would say.