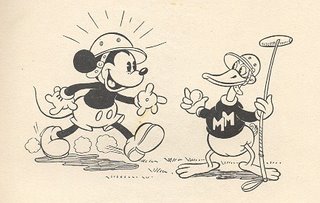 And here is the last part of Jim Korkis' great series about Walt and polo.

"Mickey's Polo Team was released on January 4, 1936 and directed by Dave Hand whose attention was already focused on his directing responsibilities for Snow White.

There isn't much of a storyline in the cartoon. It is just an interesting premise for physical gags of a polo game between four popular Disney animated characters against a team of four Hollywood celebrities. The spectators in the stands are a mix of Disney animated characters and Hollywood celebrities (Clarabelle Cow kisses Clark Gable, Edna May Oliver sits next to Max Hare, Shirley Temple cheers next to the Three Little Pigs, etc.)

The Mickey Mouse team consists of Mickey, Donald Duck, Goofy and the Big Bad Wolf. The Hollywood team of Movie Stars are Charlie Chaplin, Oliver Hardy, Stan Laurel and Harpo Marx.
While modern audiences may struggle to identify the caricatures of some of the then famous stars like Eddie Cantor, W.C. Fields, Harold Lloyd, even the most astute viewer of classic films on Turner Classic Movies might have trouble identifying the referee.

The referee is a caricature of Jack Holt who was a popular silent screen star who made the transition to talkies primarily in Westerns. In fact, Holt was the father of famous Western movie cowboy star, Tim Holt. Jack Holt was a "manly man" and a strong supporter of polo as terrific physical exercise. He played at the Riviera alongside Walt Disney but is unfortunately forgotten by modern audiences.

This cartoon was made at the height of the Disney Studio's involvement in playing polo. However, this was not the version that Walt originally intended.

There was to be considerable footage devoted to a caricature of Will Rogers. In fact, Disney animators had been sent to Rogers' Santa Monica ranch to sketch the humorist in action.

Rogers was well-known for his love of polo. He even landscaped his own polo field on his estate before he built his house. Upon his death, the estate was given as a gift to the State of California on the condition that equestrian activities continue at Will Rogers Park. It is the home of the Will Rogers Polo Club, the thirteenth oldest polo club in the United States.

In fact, it was Rogers' death in an unfortunate plane accident in August 1935 while Mickey's Polo Team was in production that resulted in his caricature being removed from the cartoon.

Hollywood's interest in polo had already begun to wane and Walt himself would hang up his polo mallet within the next two years. The story of Walt Disney and polo is just another interesting anecdote in the life of an amazing man."
Posted by Didier Ghez at 12:11 AM