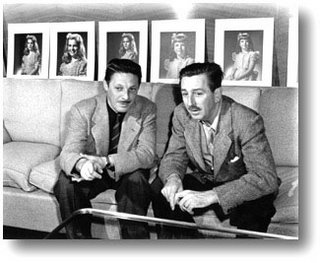 I mentioned last week the 1947 book by Lo Duca Le Dessin Anime, for which Walt had written an introduction. I found time yesterday evening to translate that introduction. Here it is. Remember however, while reading it, that it was originally written in English, then published in French, then re-translated in English gathering aproximations with each translation.

While researching the web to find a nice picture of Walt to illustrate this post, I stumbled about this photo of him with French actor Jean Sablon which I had never seen before and which I could not resist sharing.

"In our animated features, we avoid, as much as we can, having to deal with human beings. Let Hollywood do it. We have our own kingdom in which animals and even animated objects talk, think and act like human beings, but in a more appealing way. It’s an enchanted and magical world which is suited to this new breed of poetry. But animation went beyond this limited world of art.
Can we give to animation a role in the future re-building of the world? Will it be able to sustain new ideas? How will it contribute to train new habits and features of character?
I do not pretend I know the magic spell, and I do not pretend to be a teacher or a sociologist. But, along with other men who have a deep understanding of animated cartoons, I state that this art has an impact on all of human activities.

Let’s not forget that during the war, the same people that had created Snow White, Bambi, Fantasia, The Three Caballeros and even Donald Duck, tackled technical matters, their work being controlled by strategists and tacticians. We discovered that way a teaching tool of such value that it could be used for other goals.
It is without a doubt that in the mind of the teachers of the future animation will be one of the most flexible and stimulating tools for teaching. It will be enough to know how to use it.
One of the key tasks for animation today is to help inserting again into a normal and productive life millions of men and women whose life was hurt by the war. They have to be trained and taught once again.
I can imagine the ideal training movie as a reel that would link one man’s work to each phase of his life, or, even better, that would combine the different aspects of his life like mind and body.; his personal safety or his family’s safety, his home and his country, or even his sense of human friendship. Such a movie – or such a series of movies – would have to include facts of every day life: food, love, play, rest, meditation or laughter.
When such a man will have “awaken”, ready for a true social life, he will decide to improve himself in his work. As a physicist, a plumber or an engineer, he will have access to the movies that will allow him to move forward in his specialty. Migrations of people, structure of societies, philosophical principles, mathematical knowledge, sea streams, new laws of electronics will be explained on film and will become clear to everyone. Every technical problem can therefore be overcome. But one has to be able to use rationally this new principle.
Animation goes beyond borders. Cartoons speak all languages. What we create in the US can be shown in France or in Germany, in India or in Japan, through the world of children and adults. That’s where both artistic cartoons and educational cartoons find their meaning.

The word of animation is the world of our imagination, a world in which the sun, the moon, the stars and all the living things are run by us. We harvest a small character in our imagination and, if he disobeys us, we erase him with a rubber. Our tools are those that the mind can imagine and that the hand can draw, the whole of human experience: the real world of war and peace and the world of dreams, color, music, sound, and most of all movement. It’s a fascinating activity, but to explain it we have to mention pegs and exposure-sheets, frames and sketches, time spent in the sweatbox and acoustic tempos. The history of animated cartoons is in itself of huge web of intertwined data."