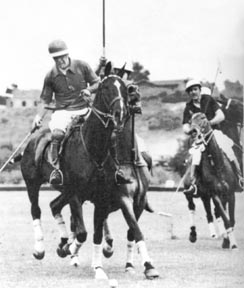 Here us the third part of Jim Korkis' great series about Walt and polo (yes, that is Walt on the right):

"In 1934, Roy Disney bought four polo ponies. At one point, Walt had over a dozen horses in his stable.

Walt was neither athletic nor coordinated. One Disney employee wondered aloud how Walt was able to stay on the horse and swing the mallet at the same time.

Unlike other young boys, Walt never played sports. For most of his childhood, he got up at three o'clock in the morning to deliver newspapers and then rush to school. At lunch time, he ran across the street to a local business to do errands and cleaning up in exchange for a hot lunch. After school, he would have to run home to deliver the evening edition of the newspaper and then come home to do homework, eat dinner and get ready for the routine to begin the next day.

Walt compensated for this lack of learning sports skills by being a focused competitor. Actor Robert Stack who was a teenager at the time remembered that Walt would "run right over anybody who crossed the line." At his home, Stack still has some trophies with Walt's name on it commemorating some of the matches they won while playing together.

Will Rogers was even more aggressive and lost a few fans with his attempts to hog the ball all the time.

However, by 1938, Roy Disney was becoming worried that the combination of Walt's aggressiveness and the inherent danger of the sport itself might rob the Disney Studio of its visionary. Walt resisted that suggestion to hang up his mallet even after he had been in two matches where fellow horsemen had suffered fatal injuries.

Always pushing himself, Walt eventually wanted to play with the better players. There was a South American team (known as "The Argentines") who were practicing on a field at the Riviera and Walt wanted to practice with them. Even then, it was almost impossible to tell Walt "no" so Walt took the field. One of the players hit the ball just as Walt on his horse was turning around and the ball hit Walt hard enough to knock him from the saddle.

Walt had four of his cervical vertebrae crushed and was in tremendous pain. Instead of seeing a doctor, he went to a chiropractor who manipulated Walt's back. Sadly, the injury might have healed if Walt had been placed in a cast. Instead, it resulted in a calcium deposit building up in the back of his neck that resulted in a painful form of arthritis that plagued Walt for the rest of his life.

In his later years, Walt required a couple of shots of scotch and a massage from the studio nurse in order to get home at night. When he went into St. Joseph's Hospital for the final time, it arose no suspicion when employees were told Walt was taking care of an "old polo injury".

Both Walt and Roy sold their polo ponies although Actor Fess "Davy Crockett" Parker has said that during one of the early parades at Disneyland, he and Walt rode on Walt's polo ponies resulting in the extremely tall Parker having his feet dangling over the side of the horse.

Believe it or not, the story continues tomorrow...."