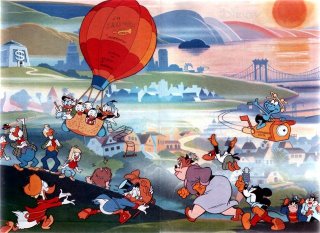 Ettore D'Agostino, one of the readers of the blog just sent me the following email:

"Your post about Cri Cri el Grillito Cantor has been a wonderful surprise for me and for my friends who didn't know the existence of a special Three Little Pigs short. I think that through the years, many artists from all countries in the world have created special undiscovered treasures inspired from the Disney universe. For example here in Italy, there was a famous cartoonist and comics author, Romano Scarpa (his stories are very popular here in Italy and are reprinted by Gemstone Publishing in the USA), who got a production license from the Disney Studios and made a short called Camminata Disney in 1982. An edited version was used as the opening of an Italian anthology TV series about Disney.
The plot is quite simple. The most popular Disney characters from Disney comics are featured such as (in order of appearance) Donald Duck, Horace Horsecollar, Daisy Duck, Clarabelle Cow, Minnie Mouse, Huey, Dewey, Louie, Goofy, Detective Casey, The Phatom Blot, Mr. O’Hara, Superduck (in Italian we call it Paperinik), Gyro Gearloose, Scrooge Mc.Duck, Brigitte MacBridge (one of Scarpa's creations for the comics), the Beagle Boys, Gladstone Gander, Peg Leg Pete and Paperetta Ye Ye (another of Scarpa's creations which is very popular in Brazil). The crowd is directed to the Sequoia TV Station where the show will start. An Eagle, who is responsible for the security of the studio, is worried about all those people coming to the studio, so, by using a special X-ray machine, he checks the contents of the bags the characters are carrying. He's shocked when see that Huey, Dewey and Louie are carrying dangerous objects such as a bomb, a dagger and other weapons. But in the next sequence we discover it's only a joke by the three nephews: the 'dangerous' object are 'silhouettes' they have put in their bags to make light of the Eagle. At the end, after other gags, the Eagle yields ("If you can't beat them, then join them") and all characters enter the Studio where Mickey with his assistant Bruto (Ellsworth's adoptive son) presents the show of the day.
Here you can find, some videoclips, screen-grabs and storyboards (the website is by Francesco Spreafico); the storyboards are from the book Romano Scarpa, Sognando la Calidornia by A.Becattini, L. Boschi, L. Gori, A. Sani.
In the ’80s Scarpa also made a wonderful animation test (30 seconds, with Scrooge, Huey, Dewey and Louie and the Beagles Boys (Duck Tales model sheets were used) about Duck Tales, but finally Japanese studios were able to take the license for the TV series: an Italian independent studio wouldn't be able to produce the number of shorts needed for a syndicated TV series."

Speaking of which: does anyone have access to that amazing "homage to Mickey" short that was produced by an independent artist for Roy E. Disney's visit to the USSR during the Perestroika era? It featured Mickey as a black shadow on the left side of the screen and a man in dark shadow on the right side, both seen in profile. They are both dancing and the man gets older while Mickey always stays the same. I have goosebumps just remembering it. It's an extremely beautiful homage and one I would love to see again.
Posted by Didier Ghez at 5:54 AM