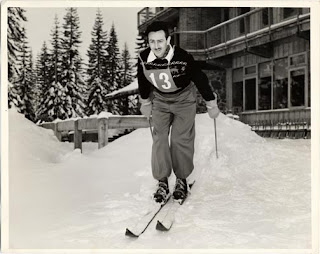 Another photo found online which I had not seen before.

According to the caption, this is Walt Disney skiing at Sugar Bowl Lodge on September 5, 1941. That date does not make any sense, of course, since Walt was still in South America.

In reality the photo was taken during the first part of 1941, according to this article on the site of the Walt Disney Family Museum. I will find to find the exact date at some point...
Posted by Didier Ghez at 12:02 AM

PS Here's another photo. http://www.sierraculture.com//wp-content/uploads/2013/11/sugabowl_1b_DISNEYFA.600_1.jpg Also, if April, this would likely give rise to the Art of Skiing short (Goofy) in November 1941.