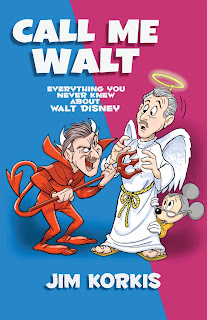 What is Call Me Walt?

My most recent book, Call Me Walt: Everything You Never Knew About Walt Disney (Theme Park Press 2017) was inspired by a seemingly simple question:

Who was Walt Disney?

Amazingly, that is a much more difficult question to answer than many people imagine.  After all, there are dozens of biographies about Walt Disney both in English and multiple foreign languages as well as additional references to his life in countless other books.

Magazines and newspapers for decades have published a summarized overview of Walt’s life.  Even The Walt Disney Company beginning in the 1930s had a pre-printed, multi-page biography to give out to journalists.   Walt himself often gave interviews to reporters or made speeches where he recounted his life.

We all know the story of the poor Midwest farm boy who only attended one year of high school and went on to become an entertainment legend thanks to his dreams and hard work.

Yet all of those accounts have the same fatal flaw.

As TV Guide writer Edith Efron wrote in her July 17, 1965 article about Walt: “(Walt’s) accomplishments are unnecessary to list.  There can be few people in this country who have not been exposed to some of them.  If his name and achievements are a matter of household knowledge, the man behind the name is not.  The fascination of his activities have tended to divert eyes from the man engaging in them.”

When we think about Walt, we all immediately think about Mickey Mouse and his animated friends, Snow White and the Seven Dwarfs (1937), Disneyland, Audio-Animatronics and similar milestones that transformed not only entertainment but the entire American culture.
Despite his showmanship and being in a bright spotlight most of his life, Walt Disney the man himself is still a mystery to almost everyone.

Where did he buy his clothes?  What different cars did he drive?  Did he also have cats as pets besides dogs?  What charities did he donate to without fanfare?  Did he believe in God and did he pray every day?  What did Walt and Lillian like to do on warm summer evenings with great frequency?  What two television game shows did they love watching in the evening as they ate on trays?

What were Walt’s political views?  What things did he do with his grandchildren that they still remember vividly fifty years after he died?  How much did Walt Disney weigh?  Who was his ophthalmologist who prescribed reading glasses that Walt never wanted to be photographed wearing?

The answers to all those questions and many, many more like them are in the book along with documentation.

Since his death, Walt has come under many attacks but those vicious misrepresentations are often at the brand that Walt created around the name “Walt Disney” rather than the man himself who remained very private and hidden from just about everyone.

I felt it was time for a book that concentrated on Walt and not his accomplishments.  So my book features no mention of Mickey Mouse or Disneyland.

It does, however, point out that he had a box at Santa Anita horse race track (along with one at the Hollywood Park race track) that he frequented as well as one at Dodger Stadium about three rows up behind first base.

While Walt was concentrating on the Florida Project, Mineral King, California Institute of the Arts, Mary Poppins (1964) and so much more, he was spending a good deal of his time participating in lawn bowling tournaments with his hand-tooled bowling bag.

Even today, there is an annual international lawn bowling tournament that awards a four-foot tall perpetual trophy made of solid Brazilian redwood with imbeds of Walt’s four personal lawn bowls along the base and is topped by a golden foot-high Mickey Mouse figurine.
The book is not another biography.  It is not chronological.  It is not definitive. Every chapter is self-contained like many of my books.

The book is about Walt as a person, a son, a brother, a husband, a father, and a grandfather.  While I freely admit I have great fondness and respect for Walt and that may influence the tone of the text, it did not prevent me from simply stating the facts both good and ill.  Several chapters are devoted to his flaws from his temper to making fun of others.
I have included twelve chapters to debunk some of the most common myths about Walt including that he was frozen, born in Spain, was racist, dishonorably discharged, an FBI informant, a freemason and more.

The foreword to the book is by Disney Legend Floyd Norman who among other things shared: “I personally never saw any racist behavior or words from Walt.  When I was there in the 1950s and 1960s, I knew Claude Wilson who was the black janitor at the studio. A janitor is pretty much invisible in that people never pay much attention to him so he was able to overhear uncensored conversations as he was cleaning up.  He never heard Walt being racist or others talking about Walt being racist.

“He also moonlighted as a bartender at many of Walt’s parties when they were held at Walt’s home in Holmby Hills.  This older black gentleman who ran the bar always spoke well of Walt and loved working for him.  Since we spoke privately, had there been anything to indicate racism, this old guy would have made his feelings known to me to warn me to be careful.  I was always struck by Walt’s openness, fairness and honesty.”

The more I tried to uncover Walt Disney, the more surprises I encountered.

Disney Legend Van France remembered in 1991 his first meeting with Walt, “Somehow I'd imagined that Walt Disney would have the soft, delicate hands of an artist drawing Mickey Mouse.  But my hand met the firm grip of a man who had grown up doing hard farm labor and working for his father in construction.”

“He was a lot shaggier in real life than he appeared in a nice pressed suit on television,” said his nephew Roy.  “He was a pretty casual dresser and didn’t pay a hell of a lot of attention to whether his hair was combed or not.”


One of Walt’s favorite pastimes when he went to the mountains to ski was ski-joring [a winter sport where a person on skis is pulled by a horse, a dog (or dog team) or a motor vehicle] and so that activity might have ended up at the never completed Mineral King ski resort.  Walt still owned shares in the Sugar Bowl ski resort as the time of his death.

I dedicated the book to Walt’s late oldest daughter Diane Disney Miller who was so supportive of my writing and getting out the true stories about her father.  I quote extensively from our conversations and e-mails including:

“I don’t think anybody really knows him anymore. His name is so familiar and the brand is everywhere. As a daughter, I have been very upset by things that have been written and said about him that were not true.   He was my trusted friend.  I could tell him anything and everything and know that he would understand.  He loved being a daddy and a grandather.

“I remember going through Dad’s dresser drawers one time looking for something.  He kept things in them like a collection of matchboxes and soap packages from hotels and I used to find those fascinating.  I found a newspaper clipping one time with the headline on it about his mother’s death.  He would never talk about her death.”

This book may not really be everything you never knew about Walt but it is filled with many things that are usually not covered elsewhere with some items that may still surprise even the most diligent Walt scholar.  If this type of information interests you, you may want to consider putting the book on your list to Santa this year.

The striking cover was done by talented animator, cartoonist and director Dave Bennett and was inspired by a similar sketch he did for the animation fanzine Animato! #10 (1986) with some significant changes.
Posted by Didier Ghez at 12:02 AM

That's a long review. o.O
But I don't have to read this one to know him better; I
already have, through official biographies and a little
imagination. I believe he was a warm and kind person, a
loveable man and a playmate. Sometimes I use his quirks
to be like him, like ad-libbing while reading fx.
...Heh, my Movember-beard even looks like his trademark
at the moment.
I don't blame him for keeping the newspaper clipping
about his mother's death and not talk about it, even
though I don't understand this. Is it because he blames
himself for the accident, that he hides it away in his
closet? That's what I think

Jim: I look forward to reading your latest from your unceasing research. Thanks for your excellent work.