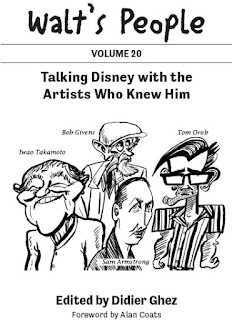 Walt's People: Volume 20 features appearances by Sam Armstrong, Leland "Lee" Payne, Bob Givens, O.B. Johnston, Wilfred Jackson, Jack Hannah, Tom Oreb, Iwao Takamoto, Herb Ryman, and Alfred and Elma Milotte.Among the hundreds of stories in this volume:- O.B. JOHNSTON analyzes the Disney Studio's early merchandising efforts, and his own four decades with the company as the head of its character merchandising division, in this book-length memoir.- WILFRED JACKSON recalls the triumphs and tribulations of his three decades as a director of numerous Disney cartoon and features, including Snow White, in two lengthy interviews with Michael Barrier and Milt Gray.- HERB RYMAN talks about his early years at MGM, his experience as an art director for the Disney Studio, his transition into Imagineering, and his close friendship with Walt Disney.- Animation historian Amid Amidi evaluates the career of TOM OREB, a little-known character designer and storyman who worked at the Disney Studio during the 1930s through the 1950s.The entertaining, informative stories in every volume of Walt's People will please both Disney scholars and eager fans alike.

As always there is some extremely rare material in this volume which is made available for the very first time.
Posted by Didier Ghez at 12:02 AM

I´m in trouble because I am at Vol.9 at the moment.

Me, I'm still at Vol. 14 and haven't got the rest
to read and discover more Disney History. So I'm
6 volumes behind...

Didier, i have written you before with corrections and this one is very minor. O.B Johnston refers to the author of "TV, The Big Picture" as Stan Onotowski (page 71). His name is Opotowski.

I mentioned an error on page 71. The misspelled name of an author is on page 69, not 71. My mistake. (The page number, not the misspelling.) And on page 72, Dean's Rag Book Company is shown as Dean's Rag Rook Company.

Yes, me again. On page 97, the year of the press conference announcing Walt Disney's plan for a theme park near Orlando is given as 1975. It took place November 15, 1965 at the Cherry Plaza Hotel and an excerpt can be seen at www.youtube.com/watch?v=9pLyVi85sfk

O.B. Johnston could have used a fact checker. He wrote that Walter Lantz was born in 1900 (Page 101). Lantz was born April 27, 1899. Johnston gave the name of Lantz's cartoon penguin Chilly Willy as "Chilly Willie." He said Lantz "has not produced a new Woody Woodpecker cartoon since 1975." Lantz shut down his studio in 1972.

On page 104, O.B. Johnston perpetuated the myth that the daughter of Johnny Gruelle found an old rag doll in her grandmother's attic and Johnny painted a face on it and named it Raggedy Ann. In her 1993 book "Johnny Gruelle, Creator of Raggedy Ann and Andy," biographer Patricia Hall debunked the story. She spoke with Johnny's sister Myrtle, who explained that Johnny found the doll in the attic of their parents' home. (The mother had made the doll for Myrtle.) Johnny then decided to write some children's stories about a rag doll named Raggedy Ann. His daughter had not yet been born.