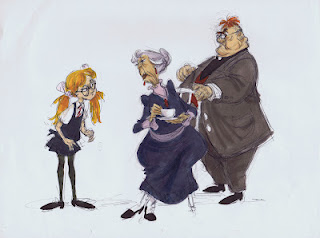 Another wonderful and fascinating write up by Jim Korkis and the books on Walt's office shelves!

I know how low is you appreciation of Miss Poncet's books, Didier, but her writings about animation and Disney in particular, in that time period, are rather unique, when then - the fifties and sixties in France, it was "in fashion" for intellectuals and artists to ignore and despise anything Disney!
It sure was not easy to be a Disney fan then BUT so much more involving because of that!
Ms Poncet even brought in Disney art into the Sorbonne University, not unlike what happened, to some extend, with the Exhibit that took place at the Grand Palais in Paris some recent years ago!

Walt got a signed copy of one of her books in 1952 (As confirmed by this article) and - my one and only personal "link" to Walt I guess - I got also mine some 20 years later when I was studying in Paris.

I even got Ms Poncet involved in the creation of an exhibit on Disney Animation for the Museum of my hometown, back in 1973, with the help of Dave Smith who loaned us some items from the Archives.

So sorry for being so verbose, but I had to share those memories triggered by the great article from Mr Korkis.

Here's a picture of the 1952 visit of Ms Poncet to the Disney Studios.

I don't dislike her book, I just think it does not bring anything new to the table.