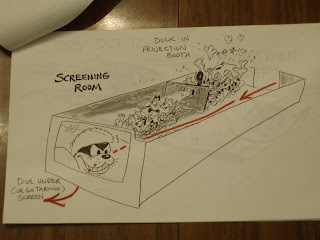 [Shortly before her death, Betty Kimball got rid of a lot of Ward's stuff. Often she would just box up everything related to a particular project in a single box and sell that off. One friend of mine purchased the box with all the information and artwork on Epcot's WORLD OF MOTION and there is so much of it that he is considering creating a website to showcase it all.

On eBay this week, it looks like some other fellow got a box filled with Ward's work on "Mickey's Madhouse/Mickey's Movieland" that was going to be an element of a movie pavilion at Epcot to be located between The Land and The Imagination pavilion. That project later expanded into the Disney MGM Studios theme park but unfortunately without Ward's attraction. Here is the link to some of that paperwork. I hope whoever buys it shares some of it with the rest of us.]

I'm thrilled to read this. I was a bidder on that lot of World of Motion documentation as well as another lot at the time with documents for the dark ride for the "Dumbo's Circus" segment of Disneyland. I was devastated when I lost the World of Motion auction, and desperately tried to convince the seller to sell me scans of the items before they shipped, so the documents wouldn't wind up forever in some collector's file cabinet!

I'm incredibly excited to find out that we're going to get to see them after all. Thank you so much!

That drawing looks like something from Tim Kirk not Ward Kimball. He and Steve worked on Mickey's Movieland.