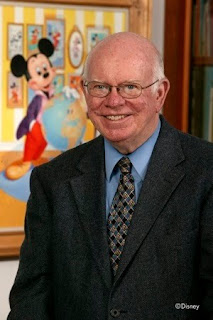 BURBANK, Calif. – June 4, 2010 – For four decades, The Walt Disney Archives has been home to the most treasured items from Disney’s fabled history, and on Friday, June 25, the Archives will mark its 40th anniversary with a special celebration at the Walt Disney Studios.

During the event, Disney President and CEO Bob Iger, noted film historian Leonard Maltin and other surprise guests will honor Dave Smith, the founder of The Walt Disney Archives and Disney’s chief archivist, for his achievements in preserving the Disney legacy.

“The Walt Disney Archives is an incredible collection, and that’s due to the dedication and passion Dave has brought to the development of the Archives since Roy O. Disney hired him 40 years ago,” said Steven Clark, head of D23, who also oversees The Walt Disney Archives. “We’re excited to honor Dave and the Archives, and to give our members a close-up look at some rarely seen ‘jewels in the crown’ of Disney history.”

As part of the Archives’ 40th Anniversary celebration, a number of new pieces from recent Disney projects will be officially added to the Archives’ collection; their identities will be revealed during the event.

The Walt Disney Archives 40th Anniversary Celebration will also feature a champagne-and-dessert reception on the Walt Disney Studios lot, and the premiere of Archiving the Archives: Forty Years of Preserving the Disney Magic, an all-new film created for this special anniversary, which will be screened in the Studio Theatre. Additionally, D23 Members who attend will receive a special gift created for the occasion.

Only a limited number of tickets, at $50 per person, will be available to this once-in-a-lifetime event, which pays tribute to the past, present and future of The Walt Disney Archives.]
Posted by Didier Ghez at 7:01 AM