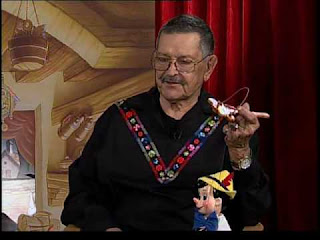 [From CLOSEUP #3 magazine 1977 Puppeter Bob Baker talking about Cristadoro and Disney: "I first worked with Cristadoro in George Pal's studio where we were filming the Puppetoons series. Chris was the third most famous ivory carver in the world. He'd done a lot of things for Disney sculpting figures of Pinocchio, etc. that the animators would work from. Some of the things he did actually inspired Disney to do the audio-animatronics thing. He made this little tap-dancing figure--it moved its mouth and winked its eyes, and it was all done with cams and gears, and Disney kept saying, 'Make it move! Make it move! Make it do this and make it do that!' and Chris said, 'Damnit! You can only make these things do so much!' Chris was a brilliant artist."]