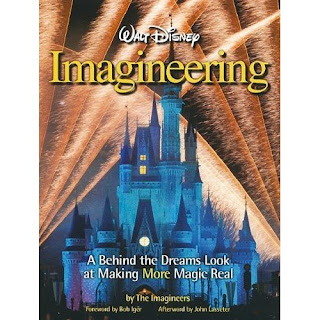 We are in May and I already know two of the books that will make it on my 5 Best Disney History Books of 2010 list. Interestingly enough both of them this time around are about park history. One is Project Future: The Inside Story Behind the Creation of Disney World by Chad Emerson, the other, Walt Disney Imagineering: A Behind the Dreams Look at Making More Magic Real by Melody Malmberg will be released next week and is definitely a "must-have".

I received my review copy last week and spent the whole weekend truly enjoying it. If you bought Walt Disney Imagineering almost 15 years ago, you know what to expect. A huge, lavish book full of never-seen-before photographs and renderings that feature the best of Imagineering, being through breathtaking artwork or by putting a face on the artists that create the parks.

And the text itself is once again tremendously enjoyable, Malmberg being both Imagineer Joe Rhode's wife and an excellent writer.

One caveat (aside from my unease at the tacky cover): If your focus is purely pre-1966 Disney history then this book is not for you as it covers mostly the new projects that the Imagineers worked on since 1984. I find those to be of tremendous interest, so I have to wholeheartledly recommend this new volume.
Posted by Didier Ghez at 12:06 PM

Good to hear that! Two books I want to read!
[]s