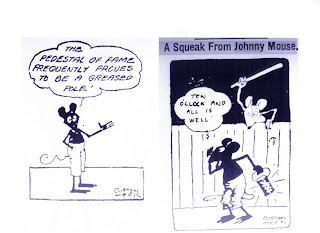 [I read your interesting posting about Meek’s Mouse yesterday and have a little to add to it.

I have done some research on the early Mickey the last year and stumbled over the connection to Meek some months ago - including his mice drawings on Lambiek Comiclopedia.I also read about the interview with Walt Disney where he told a little about Meek’s mice, quote from Mary Braggiotti’s article in the New York Post, June 30, 1944:

“There was a man named Clifton Meek who used to draw cute little mice and I grew up with those drawings…. They were different from ours - but they had cute ears.”

We can understand that Meek, when reading this felt flattered - and that he later wrote:

“Needless to say I was surprised and delighted to learn that I had in some small way kindled a spark of inspiration in an unknown country boy who was loaded with genius.”

This according to Meek’s article: After writing to Disney and thanking him, he got his photo with a written acknowledgement and signature.

After what I have found out, I believe that the inspiration from Meek was something that Disney got - not Iwerks - and I can’t quite accept the latter’s version of the creation of Mickey Mouse.
I have found a couple of early Johnny Mouse cartoons by Meek - published in The Pittsburgh Press in 1914, when Disney was still a boy. See image above.

They sure are a bit different from Mickey Mouse, as Disney pointed out, but they do have a few things in common with the earliest Mickey.

A couple of years before Mickey Mouse was created, Disney sent a birthday card to his father.According to Mickey Mouse in Color (with the collection of Gottfredson’s comic strips) where a photo of this is found, this card with three drawings of mice, was drawn by Disney himself. This seems plausible, but we probably can’t quite rule out that a studio artist made the drawings for him. See image below.

Especially one of these mice has a bit more in common with Meek’s early Johnny Mouse than with Mickey. Disney’s drawing could seem to be “the missing link” between Meek’s mouse and early Mickey as we see in on the drawing belonging to The Walt Disney Family Museum and in Plane Crazy.

- Skinny arms and legs- Elbows with sharp angles.- Naked feet- For the most part: black and with round ears

In the interview with Iwerks that you quote from, he said:

”I tried some sketches of dogs and cats, but there were too many cats (like Krazy Kat). Then I went through a batch of magazines. In Life or Judge I ran into cartoons of animals by [Clifton] Meek and got an idea for a mouse.”

According to this he asserts that he got an idea for a mouse - with the inspiration from Meek - and Walt Disney is not mentioned. I don’t believe that this version is the correct one. The question that must be asked in connection with this is: When was the mice by Meek published in Life or Judge ?

According to Meeks article from 1967 he stopped drawings mice before starting to work for World. Here he started with a pantomine strip named Grindstone George. This ran from 1916 - 1919.I don’t find it very probable that magazines from 1916 or earlier were ready at hand for Iwerks to browse through in 1928.

As we all know: According to Walt Disney’s version of the creation of Mickey Mouse, he got the idea for Mickey and made some sketches and even made an outline for a story on the famous train trip from New York to Los Angeles in March 1928.

This story is often refered to as a legend or myth, but I have the impression that several leading Disney historians believe that it is basically true. It may have been somewhat embellished by Disney in interviews through the years. I agree with those that believe that it is true.

Walt Disney would certainly not have sat idle during a three days train trip - and just worrying because of what had happened. This would have been against his nature and inclination. He knew that he would have to come up with a good idea for a new ”leading star” - and there is every reason to believe that he did that on the train.

According to an article by John Culhane in Saturday Review, Nov. 11, 1978, Otto Messmer - the creator of Felix - told him:”Walt designed a mouse, but it wasn’t very good. He was long and skinny. Ub Iwerks redesigned the character.”

Thanks to Jim Korkis for pointing towards this article.

If this was true, we probably have here the inspiration that Walt got from Meek: resulting in a long and skinny mouse.] 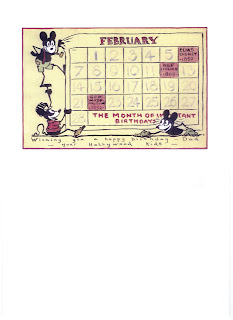 My answer: It is important to note that this interview was not fully transcribed and came as notes that often do not include the subject in the sentences. We have reproduced it re-instating the missing words and the active voice. The notes read “in Life or Judge ran into cartoons of animals by Meeker – got an idea for a mouse.” The context of the previous sentences suggests that the subject is Ub, but in reality the sentence could also be “In Life or Judge Walt ran into cartoons of animals…” We know that “Meeker” is in reality “Clifton Meek”, who drew in Life and Judge before 1916.
Posted by Didier Ghez at 3:43 AM

Mice like the ones on the Birthday card had adorned Disney promotional art from days of the Alice Comedies through the Oswald series.

They were much like the ones in the Aesops Fables that Walt, Ub and Hugh Harmon took as their exemplar in the early days.

The similarity to the 1914 Meek mice is very noticeable - presumeably this influenced many young cartoonists.

Johnny Gruelle had a "Johnny Mouse and the Woozgoozle" series in 1921, in "Woman's World" magazine, as well as "The Dwarfies" in "Good Housekeeping", which introduced some mice named Mickie, Maurice and Minnie. ["Raggedy Ann and Johnny Gruelle: a bibliography of published works"by Patricia Hall.]

Meek's later mice, as shown in the earlier blog, had sophisticated clothing - which brings to mind the "Fauntleroy" mouse on the supposed original sketches sheet recently rediscovered by Disney: this might suggest that this was drawn, by Ub, in the manner of the more recent Meek mice - but that Disney was after something more like his memory of the early Johnny. I think it interesting that the circled mouse on the 'origins' sheet has had the trousers rubbed out and skinny legs added.

This is a great piece, great research. Thanks for the read.

Didier: Yes, based on that you tell us, I can see that we cannot be sure about what Iwerks said in this interview, but I will guess that if he had referred to Walt in this context, the interviewer would probably have written it down.

In “The Hand behind the mouse” we can read, quote:

“Ub sought inspiration anywhere he could find it. He rifled through stacks of magazines. He looked in Life and Judge. A panel of cartoon animals by Meeker caught his attention. A mouse ! There hadn’t been animated mice in leading roles. The only mouse in cartoons was Krazy Kat’s pathetic love interest, Ignatz.” And so on. No doubt here about which man was the creator.

The interview has also been used in other books as a way of denigrating Disney’s contribution.

Mike Barrier said in his review of this book, quote:
”The authors have Iwerks playing a central role in critical episodes—the creation of Mickey Mouse, the use of a bouncing ball to keep the Steamboat Willie orchestra playing in sync with the images—even though the best evidence is that he played no such part.”

Barrier also said this in the discussion of the earliest know Mickey drawings last year:

”What do all these drawings tell us about Mickey's creation? In particular, do they suggest that Ub Iwerks, rather than Walt, contributed the most to the new character? Not to me. Given Walt's consistency over the years in his accounts of his early years—and given especially how verifiably accurate so many of those accounts were—I have no difficulty in accepting the basic accuracy of his (and Lillian Disney's) versions of Mickey's creation, including Lillian's role in discarding the name "Mortimer."”

Peter: Yes, Johnny Gruelle (Meek’s friend and mentor) must probably have been given permission by Meek to use this name for his mouse, after Meek had quit drawing his stripe. Gruelle’s Johnny Mouse could also have been a possible inspiration for ”the Fauntleroy Mouse”, as also mentioned by Mike Barrier last year. See the cover of ”Johnny Mouse and the Wishing Stick” when it comes to the clothing.

It was of interest to observe that the circled mouse (the prototype of Mickey) had rubbing on it. We cannot be sure of how he looked before the rubbing had been done, but the result was short trousers and skinny legs. It’s not impossible that Walt did the rubbing out and drawing of the legs himself.

Mark: Thanks for your nice words !

A very Meek-like mouse plays a bit part in Disney's 1922 Laugh-O-Gram GOLDIE LOCKS AND THE THREE BEARS. The mouse is unclothed and only partly humanized (stands on two legs, but runs on four), but otherwise resembles "Johnny" very closely.