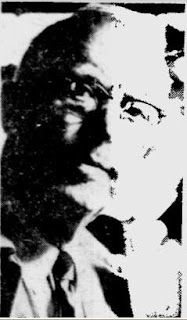 I was working this weekend on an interview with Ub Iwerks conducted by Bob Thomas in the mid-'50s (and which will appear in Walt's People - Volume 10) in which Ub recalls the creation of Mickey Mouse as follows:

"Walt came back discouraged to Hollywood [from his meeting with Mintz in New York] and set-up a meeting with Roy and I to discuss possibilities for a new character. I tried some sketches of dogs and cats, but there were too many cats (like Krazy Kat). Then I went through a batch of magazines. In Life or Judge I ran into cartoons of animals by [Clifton] Meek and got an idea for a mouse. We weren’t artists. There were almost none in the field. We worked out the character: Lilly gave it a name, then we cooked up a story sitting around."

Clifton Meek is pictured above and you can see some of his mice below. Meek also wrote an article about Walt in 1967 titled A Tribute to the Late Walt Disney, which you can read here.

None of this is really new but linked together it just made mee see things a bit more clearly that I had until now and I thought you might enjoy that same "aha"-moment.

Invaluable stuff! I can't wait to see the full interview!

Wow! The first MM drawing looks just like a Meek mouse! The missing piece of this puzzle has finally been found and we now have a believable story of how MM was created along with the first images. Great! :)