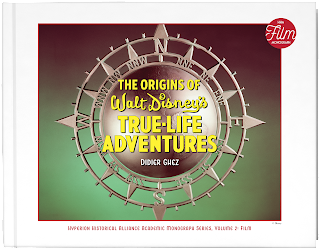 My upcoming monograph, "The Origins of Walt Disney's True-Life Adventures" is a 166-pages-long, hard-cover publication, in color and fully illustrated with more than 100 photos and drawings, most of which have never-been-seen before in book form.

Before its official release at D23 Expo this year, I thought you would enjoy a preview. Here is how the first chapter starts:

Let’s start with legend. This is how, in February 1955, "Reader’s Digest" explained the birth of the True-Life Adventures, through the voice of cinematographer Al Milotte:

"When I had a store in Alaska, Walt Disney walked in and said, 'How would you like to make some pictures for me up there?' I said, 'What kind of pictures?' He said vaguely, 'I don’t know—just pictures. Movies. You know—mining, fishing, building roads, the development of Alaska. I guess it will be a documentary or something—you know.'

I didn’t, but we went out and shot everything that moved and sent it to him. After a while he wired, 'Too many mines. Too many roads. More animals. More Eskimos.'

This is a great story, and a wonderful tall tale. More compelling than this legend is the real account of the origins of Walt Disney’s True-Life Adventures, a series, which, in the late 1940s, revolutionized the art of nature cinematography as Ken Burns would reinvent the art of historical documentaries half a century later. To understand how and why the first of the True-Life Adventures, "Seal Island," was shot, produced, and released, we have to travel not only to Alaska but also to Arizona and to Maine. We have to unearth some of the abandoned True-Life Adventures, from "The Story of the Nile" to "Wild Horse Story." And we have to go back in time, to the year 1943, when Walt was starting to plan for the creative rebirth of The Walt Disney Studios after WWII.

In fact, our story begins even earlier, in the woods of Maine, in the Summer of 1938. Ten years before the completion of "Seal Island," our tale already features a team of naturalists armed with a camera.