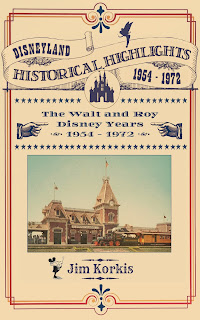 This just in from Jim Korkis about his new book Disneyland Historical Highlights 1954 - 1972:

[The Disneyland Stories You Were Never Told

Take an anecdotal time-travel trip back to the memorable years when Walt Disney and his brother Roy were operating Disneyland.  Those magical years were a time when Walt’s park was not an overpriced reservation vacation but truly the Happiest Place on Earth.

Each chapter in this book is devoted to a specific year in that early history of Disneyland from 1954 to 1972 and are filled with stories that have been forgotten or never told.

Besides information each year on such things as ticket prices, attendance, the Candlelight Processional narrator, employment numbers, each chapter has several short essays about the events, attraction openings and much more that occurred during that particular year.

While most histories of Disneyland will focus on the fact that 1959 saw the introduction of the first three “E Ticket” attractions (Submarine Voyage, Monorail and Matterhorn bobsleds), this book also details the “Western Weekend” when television cowboy stars appeared for a three day weekend,  the infamous Car Club Day that inspired Ed “Big Daddy” Roth to create his Rat Fink character, Nikita Khruschev’s failed attempt to visit Disneyland, the complete schedule of events for the June 14 dedication ceremonies and more.

So much was going on at Disneyland every year that all the information was never properly documented and interesting little historical tidbits have slipped through the cracks but are finally recounted in this book.

Every page contains something that might surprise even the most avid Disneyland afficionado drawn from decades of research, personal experience as well as exclusive interviews with the Imagineers and executives who were there during those years.

Everything from a Yippie Invasion that shut down the park to when Annette dressed as an Indian princess signing autographs in the Indian Village to why the Enchanted Tiki Room did not become a restaurant as originally planned are revealed in this book.

For those who were there, the book will bring back fond memories and for those who weren’t, it will give some insight into how those early years were so magical and so memorable for so many Disneyland guests.]