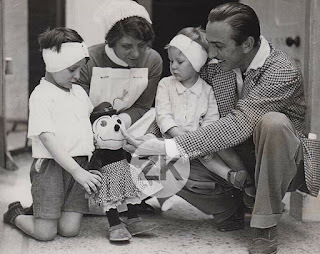 On June 24, 1935, during his visit to Europe, Walt attended a fundraiser at the Westminster Hospital.

When I wrote "Disney's Grand Tour," I knew of only one photo of the event which I did include in the book.

I just found another photo that I had never seen before. It is being sold on eBay at the moment but is way too expensive for me.