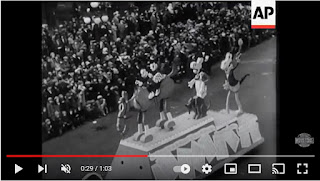 I just stumbled upon this very rare clip (see 0:27 onwards) which shows a float titled “The Court of Funnies,” which appeared in the Christmas parade sponsored by the Eaton Department store on November 17, 1934 in Toronto, Canada. The same parade also appeared in Montreal on November 24, 1934.