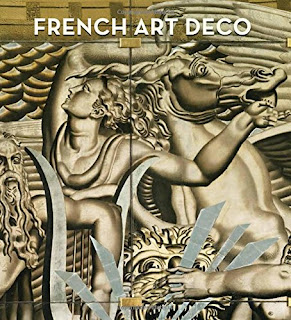 I am really intrigued by Wolf Burchard's upcoming book, Inspiring Walt Disney: The Animation of French Decorative Arts (note: the above is not the cover).

The blurb on Amazon reads:

[The films created by Walt Disney and Disney Studios represent almost a century of creativity. While they are often discussed as a quintessentially American art form, this captivating account reveals that the inspiration for Disney’s signature aesthetic extends across the Atlantic. Exploring Walt Disney’s personal fascination with French decorative arts and examining the novel use of French motifs in his Studios’ best-loved classics, the publication features 40 works of European design—from furniture to Sèvres and Meissen porcelain—alongside 150 film stills, drawings, and other works on paper from the Walt Disney Animation Studio Library and Walt Disney Archives. The text discusses the French aesthetic influences visible throughout Disney’s theme parks and beloved animated films, including the late Gothic architecture in Cinderella (1950); bejeweled, medieval-style books in Sleeping Beauty (1959); and Rococo-inspired furnishings brought to life in Beauty and the Beast (1991). This book bridges fact and fantasy by drawing remarkable new parallels between Disney’s magical creations and their artistic models.]